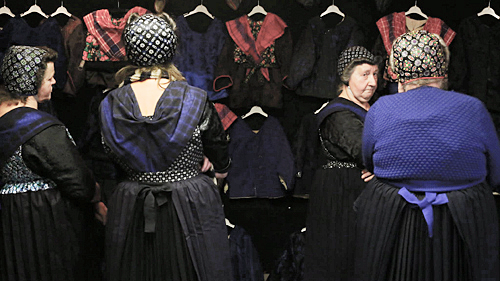 It is King’s Day and I am off to Staphorst to start my first day of filming. People in Staphorst are extremely loyal to the House of Orange, our royal family. I should say part of Staphorst, because the people of Staphorst do not represent a homogeneous group. But most of those who belong to the Reformatist church are very loyal royalists. This loyality to the House of Orange goes back to 1573 when William of Orange, Protestant himself, claimed to have a special bond with God. Since then orthodox Protestants cherish the trinity God, the House of Orange and the Dutch Nation and my seamtresses collect all sorts of royal paraphernalia and don’t miss an opportunity to express their loyality to the Dutch Royal house.

A filmmaker friend of mine asked whether Staphorst women were jewelry to go with their traditional dresses. Staphorst women do wear silver headgear, with ‘curls’ of gold – in the past, the amount of ‘curls’ correlated with the wealth of the family te woman belonged to – and they do wear bibles and purses decorated with silver. Young girls are given a silver buckle with their father’s initials engraved on it, to wear on their hat-wear called the ‘Nette’. The clasp later is sawn on the black cloaks, which they wear to church on sundays.  But these silver and golden artifacts are not jewelry in the sense of beautifying the body, like earings do, or necklaces, because traditional Staphorsters reject vanity, which they consider not-biblical and therefore sinfull. For a community of farmers where wealth and prosperity is measured and shown off, this objection to vanity and frivolity presents  a spiritual challenge, which is solved in many creative ways.

Just one note before I leave: There are specialists in Staphorst and outside the village, who know much more about the details of the Staphorst’s dressmaking traditions than I do, to which I owe much respect. Most of them are described in detail on the website StaphorstinBeeld.nl. Please don’t hesitate to correct me or send me questions and I’ll try to clarify them.